I Need Your Help!

My Coworkers niece has done an amazing thing and needs your help with votes. She is participating for a scholarship by joining the duct tape prom dress contest. Her name is Amanda and she took strips of duct tape and knitted a prom dress and items for her date to prom. You HAVE to see this. She is incredible. If she receives the most votes - she will win a $3000 scholarship!

You can see her story HERE. She is all over the internet. How cool! Voting lasts until July 2nd and the judges are asking for people to vote once a day for their favorite. If you like her dress and want to help, please stop by and vote for her. To vote go to stuckatprom.com and go under vote now. You will find Amanda under the vote now page and she is entry number 36.

Finally.... here are some projects 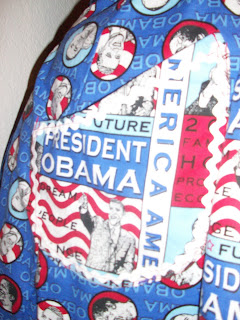 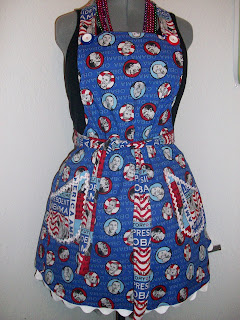 An obama apron for my boss. She loved it!!! 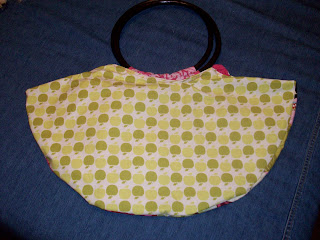 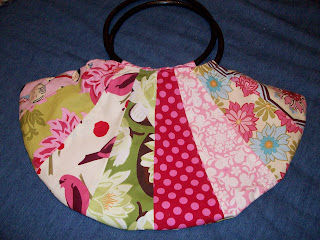 My bag for the Seams to Me Swap. It was really hard to not keep it for myself!!

More to come too!

the Chickenfoot Runner and the Hutch Redo for May's challenge. Congrats. Since it was a tie, both will be added into the final voting in September for a chance to win. I have to say all the projects so far have been so great! I can't wait to see next month's entries.

I have done some sewing on the home front and have some updates to show you. I will be home tomorrow night, so stay tuned for an apron, a purse and my niece's birthday present!

It is voting time!!!

I need your help. The first month of Because I Matter Challenge has come and gone. Now I need you to vote for your favorite project. The one project that wins this month will go on to the final round of judging for the prize in September. You may vote as many times as you would like!! Let's get a ton of votes that way all my ladies will feel motivated to continue on sewing for themselves this summer. Here is how the voting will work:

I have named the projects at the bottom of my blog (sorry, it was the only place it would all show up!).

Return to my blog and vote away!!!

Voting will occur from Sunday until Friday at midnight. Get the word out about your favorite projects on your blogs and get some people to vote with you. Good Luck to all of my challenge ladies. May the best project win!!!
at 12:20 AM 2 comments:

Ushering in a new era in our household

Back in 2000, my mom took me to Walmart in Waco, Texas and bought me a $100 sewing machine. I remember her exact words were "Let's make sure you are really going to do this sewing thing before we buy you a nice machine." I began sewing off and on over the years, but did not really start my sewing "hard core" until the fall of 2006. A new day was born in the household. My spare bedroom went from barely holding anything in it - to being completely monopolized by my obsession. Fabric began exploding from the walls!! For nine years, my faithful little Brother sewing machine helped me create some fun projects. My machine heard the language my grandparents would have been horrified to know that I used!!! My machine saw me through some hard projects I swore I would never make again. This weekend, my Brother sewing machine finally began it's retirement. While a side of me was sad, I was mostly pumped as I thought about what new machine I would replace it with.
Tonight, we went to a local sewing machine store and a new member of the family was brought home. Allow me to introduce you to my new machine: 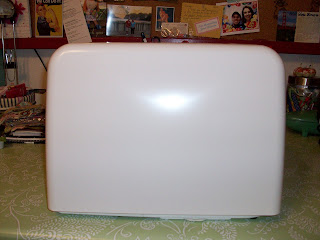 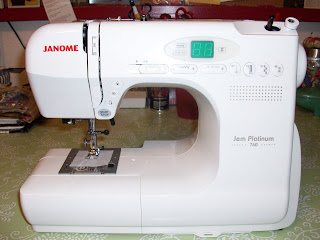 Just like in 2000, my mom bought this machine for me. (My mom reminded me now that she bought this machine for me, I now can complete her wish list of projects!!!). I knew I wanted a Janome and there were several models I was interested in. Most of the ones in another store we stopped out were sold out. I had been interested in the machine in the photos when the lady at the store gave a demo. The nice thing about the gem 760 is that it is 3/4 the size of a regular machine and it weighs 12 pounds. The other great thing like an article I read said was that usually a slightly smaller and light weight sewing machine means you sacrifice things and usually A LOT of things. With the gem, you get a normal sewing machine just a bit smaller and a bit lighter. Awesome. We are pretty sure we will move in a couple years and when that happens, I know we will be down sizing (my husband is uber green!!). This machine with it's smaller size only made the most sense!
The difference: the arm length is 1" shorter and the width is 1/2" difference. That's it! I know - crazy, huh?

This machine has 60 stitches, several which can be used on quilts. I played with it just a bit tonight. Tomorrow night when I have more time I am going to finish up some projects that I was afraid to continue with my old sewing machine's health declining! I have some picnic placemats to show you and also an apron I received. The apron is PERFECT. I will try to pry myself away from the machine at some point tomorrow night and attempt to show you some pics!