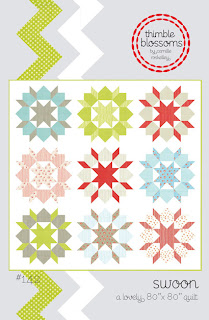 I finally bought the PDF for this quilt.  This may be more than I can handle, but I think I want to try it.  I have been stalking and obsessing this pattern but thinking I couldn't do it.  So, I finally talked myself into buying it and then thought I would read the pattern to see how hard it might be.  It doesn't sound too tough at all.  Now comes the hardest part...... what fabric line do I want to use???
We'll see later if I still think I might have chewed off more than I could handle!!
at 7:00 PM 5 comments:

Love In A Mist Block

I was playing on Pinterest and found a block on there that I fell in love with.  You can go to to see what flickr user Oneygirl did with this block.  From her Flickr I was able to find the tutorial for the block - named Love In A Mist Block. 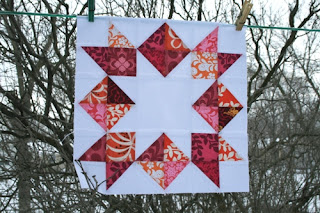 Block made by and tutorial found at modifytradition.blogspot.com

This block was really easy to make, but looks labor intensive.  I love stuff like that. 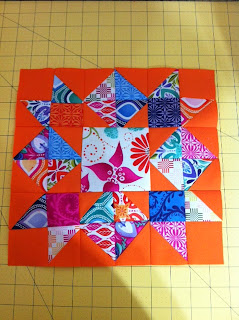 My block made from the Love In A Mist Tutorial

I made one error when sewing up the block.  I forgot to line up the points in the middle sections.  I also added a print fabric in the middle instead of the plain similar to Oneygirl's block.  I made myself one first as a test and to become familiar.  I am now going to use the orange, yellow and teal Heirloom line from Joel Dewberry to work on my secret swap partner's zipper pouch.  This is for a very special girl for the Post Sewing Summit Swap.  I am very excited to make this girl something sweet and fun! 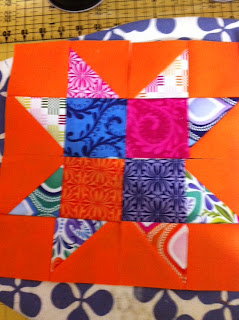 While making this block, I realized I also just made a star block like I wanted to try.  Who knew it was an easy block too???

I was thinking this weekend that I need to start making a block a week to push myself and to become more familiar with quilting blocks, as I am still new to this quiliting thing.  I think not so bad for one of my first complex quilt blocks - right?  I used Kate Spain's line Terrain.  My friend Kelly, who owns a fabric store here in Dallas-Ft. Worth, Stitch-n-Lounge, helped talk me into the fabric.  I have seen Terrain in projects and LOVE it, but I would look at the bolt and not be so sure.  So, I bought a layer cake and now I am obsessed with these bright and happy fabrics.  Might be some more Terrain projects being cranked out soon.
at 11:18 AM No comments:

I was lucky enough to be selected for this year's Etsy Fort Worth Indie Craft Bazaar.  It was a ton of hard work.  I went to the Sewing Summit and then came home and kept sewing up until the show practically.  I have to say I didn't sell as much as I would have liked, but the exposure alone was worth it.  I was a little to nervous about putting myself and my sewing out there!!!  My husband thank goodness took some pics of my booth. 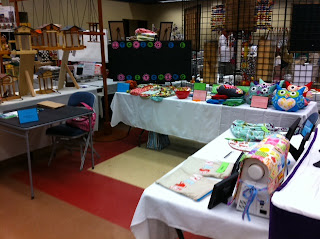 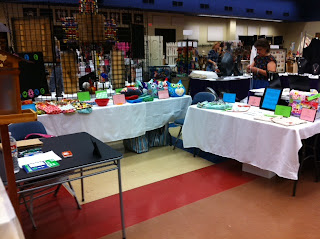 I didn't get crazy decorating like some of the other people there, but I also reminded myself that most of the people I spoke with did this almost every weekend.  I don't see how I could swing that and full time job.  I was invited by a few other street faires and craft functions due to them liking my work.  I might attempt a few more shows in the Spring, but want to take the Holidays to sew and have fun.  I will be placing some items into my Etsy shop over the next few days from the Bazaar and I also am doing some pattern cleaning too.
at 10:56 AM No comments:

Updates coming all next week

I finished my show with Etsy Fort Worth and it was tough!!!  All that sewing and waiting for people to buy it can be stressful!!  I have some new projects and fabrics I am working with and some in the mail to start some more!!  I should finally be back to regular posting again.  International Quilt Festival coming up in just a couple weeks.  There should be some fun posts with hopefully some of my favorite designers in a couple weeks.  See you all next week!!
at 9:22 PM No comments: